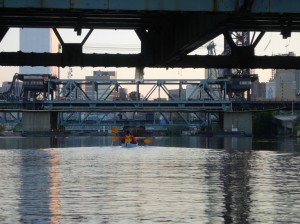 We paddle into Newark with the dusk, Carl, Cathy and I, around a bend in the river and past a decommissioned Bascule bridge frozen in the open position with a welcome message spray-painted on its underside: Newark Sucks.

The river is narrow on the approach, almost a culvert, corseted by bulkheads on both banks and domed by closely packed rusting iron bridges. Newark’s first bridge across the Passaic was a wooden drawbridge that spanned the river at Bridge Street. Its completion in 1795 sped the transport of people and goods between Newark and New York City. Today, the city’s seven bridges carry countless cars and trucks and buses and trains and lots and lots of people in and out of Newark.

The modest skyscrapers of downtown rise up from the western shore. On the opposite bank, in Harrison, light industrial buildings sit in a field of tawny grass. The grass evokes the salt marsh that once enveloped the lower Passaic. But the grass won’t survive much longer. The Harrison side of the river is destined for major development. A soccer stadium, the first phase of the Harrison Metro Centre project, will soon replace the open spaces and the lovely old Charles F. Guyon Pipe Fittings and Valves factory. This massive, barn-like structure, which loomed so gracefully over its neighbors, is being dismantled board by board. On the evening we paddled past, the factory had already been flayed. Its intricate wood framing was exposed but intact, a graceful skeleton against the lavender sky.

The water before us is dead calm, an obsidian mirror as shiny and impenetrable as the windows of a stretch limousine. It is Sunday evening. In a few minutes streetlights will begin to flicker on, but for now the city is hushed and shrouded in twilight. A lone pedestrian, a teenage boy I think, makes his way across the first of two decrepit iron bridges ahead. His face is hidden deep within the folds of a dark blue hoody. I wave, but he doesn’t respond.

I slow down as I approach the rusting NJ Transit Bridge, and start to back paddle when I notice a train pulling out of Penn Station. I don’t want to be under the bridge when the train crosses it. I can see the headline: CRUMBLING BRIDGE CRUSHES KAYAKER. I lay my paddle across the cockpit and cover my ears against the squeal and rattle of the train wheels on the steel tracks above.

Ten feet below me, buried in the dark pudding of silt and muck at the bottom of the river, is the world’s second largest deposit of dioxin. Andy Willner once told me that the sediments in this stretch of river are so richly contaminated that “if dioxin had a use you could mine it.” There are other poisons buried down there too: polychlorinated biphenyls (PCBs) and polycyclic aromatic hydrocarbons (PAHs) and dichlor-diphenyl-trichlorethylene (DDT) and the whole cast of heavy metals – copper, cadmium, chromium, lead, zinc, nickel, mercury. All the nasty byproducts of Newark’s electroplating, hat-, paint-, varnish-, leather-, fertilizer- and pesticide-producing past are there below me, bound up in the Passaic River mud. Dioxin is the most deadly of them all. I draw my paddle up out of the water and slide the small rubber drip guards as close to the paddle blades as they’ll go. I don’t want any of this water dribbling down the paddle shaft and dripping on to me.

The highest sediment concentrations of dioxin are just downstream at the site of the old Diamond Alkali chemical plant. But the Passaic is a tidal river here. Opposing forces of ocean tide and river current have been volleying toxic particles up and down this 17-mile stretch of the Passaic, from the Dundee Dam to Newark Bay and back, over and over, day after day, decade upon decade for the last 50 years. From Newark Bay, the Passaic toxins have found their way out into Arthur Kill and Kill Van Kull, the two tidal straits that separate New Jersey from Staten Island. They have drifted as far as New York Harbor.

Every Passaic River flood – and there have been many – sends river water and its poison sediment load surging horizontally out across the river’s floodplain and into the marinas and industrial parks and playgrounds and ball fields and towns where boats and trucks and people carry the toxins further still. No one really knows how far the toxins have traveled or where they eventually wound up. Traces of dioxin and other poisons may still linger on bulkheads and hulls and pilings and tree trunks and any other surface within the river’s long watery reach.

Excerpts from This American River: Paradise to Superfund, Afloat on New Jersey’s Passaic are the copyrighted property of the book’s author Mary Bruno.

Want to join the discussion?
Feel free to contribute!